Ich heiße Nicole. Ich komme aus den USA. There you have it my first week of German classes under my belt and I can now say my name, where I’m from, where I live, and what languages I speak. I have started my classes 3 days per week for 3 hours each class. So far they are great. I have never really learned a language this way. Growing up with both Spanish and English spoken I just always knew both. Then in school I just continued the Spanish so this is my first time starting from scratch. It is actually pretty fun and I think I’m going ok; I seem to be keeping up although my accent needs some serious work. Any more that 3 days per week would be too much for me. By Friday I had about all I could take for one week. The class seems to be a good mix of teaching us the foundation like how the verbs are conjugated and trying to make sure we have some real life skills. For example, we spend time practicing reading out our mobile numbers and then having to listen to a voice mail and write the number down. This seems pretty basic but when you get a message and you can’t understand what they are saying and you can’t copy the number down fast enough it is incredibly frustrating so it is a skill I am excited to have.

It has been a busy week in our house as our shipment finally arrived. I could not wait to finally have our own things. I was in a hurry to get my own bed, my kitchen things, and the rest of the kids’ toys. What I seem to have forgotten until the night before our things arrived was just how much work it is to move in. The apartment itself is big and open, lots of open floor space. I knew there weren’t closets but in my head I was getting creative about storage options and feeling like there was a plan in place. Then our things got here and I realised that we not only have too much stuff but nowhere to put it. The moving team was outstanding and they were able to unload the full truck by midday on Tuesday. Then they started assembling furniture and when they got back on Wednesday it was just getting everything out of boxes. Jamie and I had been working like crazy to unpack and get things put away as fast as we could, then with their help everything was piled up everywhere. Finally, by early afternoon on Wednesday with only about 5 of the 252 boxes still left to unpack we had to ask them to stop. There was literally no more room to put things. Every counter was packed, there were piles of linens, pictures, books, and junk everywhere you looked. It was overwhelming to say the least. So since Wednesday we have just systematically tackled each room. The kids’ rooms where the easiest, we ordered wardrobes for our room so could eventually put our clothes away, books were sorted and bookcases loaded up. But the kitchen is proving to be a much bigger challenge. With a fraction of the cabinet space I had before we just don’t have enough room for everything. Jamie is going to put up shelves but right now the laundry room looks like the housewares section of a TJ Maxx, a mess of things just shoved any available place I can find. Now 6 days later I would say the house is 90% there. We need to hang pictures and I will work on actually decorating so it feels like a home. I just have to take a deep breath every time I pass the kitchen. Hopefully by this time next week that will be done too. 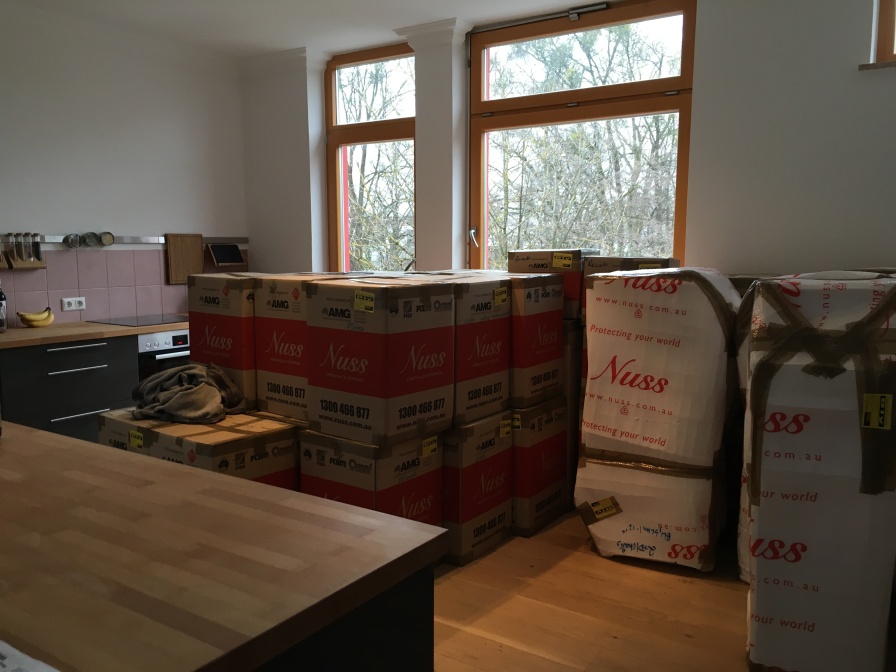 Relative calms before the storm.

As we were moving I think more than once either Jamie or I ask why we do this to ourselves? Moving is the worst. It’s not even the getting settled in a new country it is the actual unpacking of boxes. Now after days of unpacking I look around and my house is filthy so everything needs a good scrub down. We are tired, sore, and stressed. As we have been going through this I remember thinking the same thing in Sydney. I actually really hate to move… but… then on Saturday we forced ourselves to go out in the evening and check out the big Christkindlmarkt at Marienplatz and Sendlinger Tor. We needed to get out and remember the pay off for going through the hassle of moving. They were great. Immediately we had hot delicious crepes to get us started. Jamie and I discovered that we may not be the biggest Gluhwein fans but by the second cup it turns out a nice hot mug of mulled wine on a cold night is pretty good. The markets we went to were some of the most crowded and most geared toward tourists, Marienplatz is the big centre square with the Rathaus and Glockenspiel. I’m looking forward to exploring some of the local markets.

Reinvigorated by our trip to the markets the plan for today was to finish the kitchen and once the kitchen things are out of the laundry room I can move the overflow things out of our bathroom, etc, etc. Well by the time I got up Jamie had discovered that we don’t have the screws he needs for the shelves. So instead of staying in here staring at shelves we can’t put up we decided to go check out Neuschwanstein Castle. It is a whimsical castle that Cinderella’s castle was based on. Google maps said it was only about an hour and 20 minutes away so we jumped in the car and we were off. In reality it was closer to 2 hours away but we both enjoy going for drives and it was the first time we have driven up into the Alps since we went to Innsbruck in October. Kellen was excited to start seeing snow and Jamie and I were totally won over by the alpine lakes. It was a beautiful drive on a clear bright day. The castle itself we only ended up seeing from the outside, we will have to plan another trip out there when we have visitors. We got so spoiled in England being able to just drive up to castles, pay a minimal entrance fee, and have free reign of the grounds. Neuschwanstein was so crowded and you can only enter the castle through a guided tour which happened to be sold out for the day. But we saw both castles and had a nice Sunday drive so we were happy.

Overall it has been a long week. I started my classes. I remembered how much I hate moving and looking at our furniture with fresh eyes the wear and tear of multiple moves is starting to show. But I was also reminded of why we do this. I love being somewhere new. It feels like traveling but we get to live here. In Sydney the pain of moving was quickly overshadowed by the weather and beaches. Here it is going to be the traveling and the alps. We already have our trip for ski week in February booked. So ask me 6 months from now and I’m sure I will say that I could do this again. That being said it would be nice if we had longer than 2 years in between moves but we’ll see what happens.