Skip to content
It’s been a long time since I’ve posted, at different times I’ve thought about writing something but really our life has been plugging along and I figured only two people would be interested in hearing about the ins and outs of Kellen’s day at preschool or Ella’s ballet lesson. Since I talk to my mom and Jamie everyday there didn’t seem to be a need for a post. Since we arrived I’ve really felt like Australia is nice, or more specifically Sydney, but it is so similar to the US that I’m not sure it is different enough to warrant the high cost of being so far from family. I was lucky to take a trip back to Seattle in May so I could be there for Elizabeth’s wedding and as people asked how Australia was I really felt somewhat indifferent to it, we like it but I don’t feel drawn to stay, there are good aspects and bad aspects, it’s just ok.
What I wasn’t expecting was the effect a trip back to Seattle would have. Once I got back to Sydney I was able to see a lot of the things that actually are quite different and unique here that we just won’t get anywhere else. It is currently the middle of winter and we were at the beach playing in the sand on Sunday, Jamie asked where else would we be able to have the combination of how beautiful, clean, air quality (a co-worker just moved to Beijing so this is a very real consideration), good public schools, and a city that is large enough to have good jobs. I think the initial reaction was because it is so much more like the States than England is, I just read Bill Bryson’s book Down Under and he had a good way of explaining the unique blend of British and American influence here in Australia.
I can’t tell you how exciting it was. Insofar as I had accumulated any expectations of Australia at all in the intervening years, I had thought of it as a kind of alternative southern California, a place of constant sunshine and the cheerful vapidity of a beach lifestyle, but with a slight British bent – a sort of Baywatch with cricket, as I thought it. But this was nothing like that.
What’s more, and here we come to the real crux of things, I like it, straight off, without quibble or doubt, in a way I had never expected to. Something about it just agreed with me. I suppose it helped that I had spent half my life in America and half in Britain because Australia was such a comfortable fusion of the two. It had a casualness and vivacity – a lack of reserve, a comfortableness with strangers – that felt distinctly American, but hung on a British framework. In their optimism and informality Australians could pass at a glance for Americans, but they drove on the left, drank tea, played cricket, adorned their public places with statues of Queen Victoria, dressed their children in the sort of school uniforms that only a Britannic people could wear without conspicuous regret.
I think where I’ve landed is that for a family this really is a utopia. When I compare it to the States I should really say Seattle, as so much of the difference centre around weather, and when I say Australia I should really say Sydney, or more specifically our area of Sydney. Where we live is an almost bizarrely ideal area. We have the beach on one side and the bay on the other. There is almost no crime, we are surrounded by parks and it is extremely child friendly. The flip side to that is that the cost of living is the 3rd highest in the world, I wanted to get an oil change only to find out they are $150. There is also almost no diversity around us. There is relative financial diversity but while I have met multiple people from South Africa and Western Europe that really makes up the extent of the diversity in our area. There are suburbs that are predominantly Asian but we make up most of the diversity at Kellen’s preschool here. 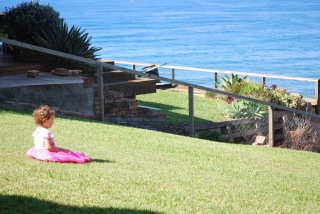 But day to day it is great for the kids. In the summer Patrick was meeting kids at the beach every day, now that it is winter he is meeting them for pick up rugby games. The Xbox playing time is a fraction of what it was before. Kellen is always outside, at school they do most of their group time and activities outside, every time I even open the side door to hang laundry he somehow manages to dash out to the backyard. Last week was school break and we went to the library, as soon as we got home his first instinct was to take his book outside into the sun to look at it. I love that keeping him busy over break didn’t involve indoor play centres or endless hours of too much TV. Ella is happy to run errands with me because most of the time they involve walking around town where she can stop and look at things, she usually scores a doughnut from the outdoor bakery counter and gets to pet a few dogs along the way. It doesn’t sounds all that ground breaking that kids should play outside but after Seattle and then England it is a huge difference to be able to spend time outside year round. I was a real challenge was to try and keep kids entertained when it was either raining or freezing temps for months at a time. Being able to just head down to the beach on Sunday morning for the kids to dig or collect shells and have the chance to spot whales or dolphins is amazing. We are also starting to actually social with adults and no kids along, which again sounds obvious but when you are new somewhere it takes a while. Through school, ballet, and soccer I have met more people in the area so don’t feel quite as isolated as I had earlier in the year. 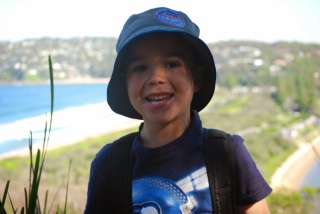 I also came back with a reminder of how nice it is not to live in a climate of extreme politics whether it be over women’s rights or gun culture. The lack of vast expanses of new housing developments and strip malls. Or the thought of trying to fit in our English size house with Ella now being as active as Kellen is sounds overwhelming to say the least. 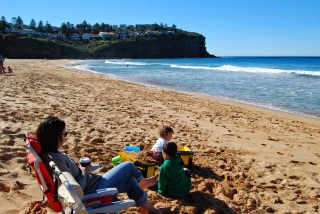 So I was trying to think, why the sudden change of heart from indifferent to liking it here? Then I realized that in 2 weeks it will be 1 year in Sydney. I remember when we hit that 1 year mark in England suddenly feeling much more settled and comfortable, in a way that makes you realize that you weren’t fully comfortable before. I think I’m going through the same process here. The physical settling in was faster here, it was easy to figure out where to live, where to shop, brands, etc. But I do think when you move to a different country it takes a year to fully settle. Basic things like what the weather is like each season or what to expect during the kids’ school year. We just renewed our lease on the house for another year and it is nice to know we aren’t moving anytime soon. Ella has her spot in preschool for next year and Kellen is enrolled at the local public school to start kindergarten next year.
This isn’t just an open love letter to Australia. There are drawbacks to being so geographically remote. The school year here is longer similar to England so the kids actually have quite a few breaks throughout the year. Living in Europe we took advantage of every break and there were so many places close enough to drive or a cheap flight away that we tried to go somewhere of every chance we got. Here even traveling within Australia is long distances and expensive flights so to go almost anywhere is a longer and expensive family vacation. We are also so far from family, we’ve priced what it would cost to visit for Christmas and we would be looking at something around $10k just in airfare to get there. It is also very expensive here so we try and do as much shopping as we can when Jamie goes back for work and just bring an additional suitcase back. Plus my kids are growing up resistant to wearing shoes or anything that resembles warm clothing.
While we would jump at the chance to move back to Western Europe in a heartbeat we are finally settled here. The thought of where our next location might be is exciting but I no longer feel like we are just waiting our time in Australia out and that is a nice change. When I look at the environment and lifestyle for the kids I can think of few places that are better for them to be right now. While I won’t be applying for citizenship anytime soon I’m starting to see how this place will eventually be hard to leave.