Skip to content
I started this blog as a way to update family and friends on how we are doing, observations from an international move and to hopefully share our experiences with everyone back home. It has become a way for me to do that but I have also found that when I have something on my mind writing it out helps me think it through so I’ve found myself posting about politics and parenting and things in between. The one thing I never intended the blog to be was a tool for mourning yet we just lost our 4th family member since moving and once again I find myself sitting down to use writing as a tool for sorting through the emotions. Being far away it is a way to add my memories to the conversations I know are happening back home and in a way eulogizing the people we have lost. These are the posts I wish I didn’t have to write yet find that writing them somehow helps. I am committed to writing a much lighter post about the things we have been doing and how the kids are changing in the next few weeks but for today all of my thoughts and emotions are overwhelmed with a feelings of grief, loss and sometimes rage. 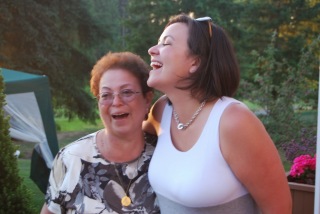 I have always had a special relationship with Mia, she was my godmother and aunt. When I was little she was the person who I would spend the night with and get to have my nails painted. This may not seem like a big deal but my Dad was not a fan of nail polish so it was a special treat to get to leave Mia’s with pink painted nails. She has just always been there at every big moment birthdays, graduations, I think she arrived at the hospital at almost the same time I did with both babies and came back multiple times. We would talk on the phone at least once a week and I think she was second only to my mom in the interest level in every little thing the kids were doing. I would complain about the things they would do and she would laugh about the preciosos, I would tell her no Mia they are trouble makers not preciosos and she would just laugh. The kids would cram in front of the computer to Skype with Tia Mia and when we were in Seattle they were allowed to run rampant through her very white and very clean house. But it wasn’t just the phone calls, which I don’t think she knew how much they helped me too, while she was recuperating I was isolated in new places. She was just a part of our life. The cookbook she made for the nieces filled with recipes used by her and Abuelita is one of the most used cookbooks in our house. Every time I made something Jamie would have to tell me that it was good but it wasn’t Marina’s. He loved to tease her and get her laughing, since we found out he just keeps repeating that just a week ago he had her on the phone laughing how can this be happening? We all loved her very much and the thought of not being able to call her or see her is something that just hasn’t sunk in yet. I just feel very sad. 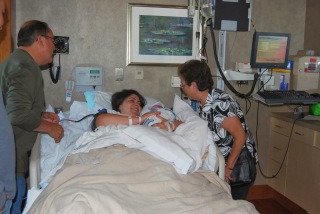 What is so frustrating is that she had to deal with so much over the last year. Going into her surgery there is no way she could have known the prolonged series of surgeries and hospital stays she would have to endure over the course of the year. Arthritis is thought of as something that makes people sore or limits mobility but it can be so much more cruel and debilitating. Then I wonder how can one family deal with so much? Losing Abuelito was difficult, then losing Pepe was a shock that people are still trying to make sense of. Going into this holiday season everyone knew it was going to be hard and sad and something that everyone just had to get through and now we’ve lost Mia. I’m angry. I’m angry that my Dad and my Tio have had to lose their father and two siblings in such a short period of time, how are you supposed to handle that? I’m angry that my cousins still dealing with the grief of losing their Dad now have to start the process all over again. I’m angry that Andy has to figure out how to move forward without her. I’m so angry. I don’t understand why things happen the way they do. Can only so many good things happen before something bad happens to balance it out? Have we done something to deserve so much loss in such a short period of time? I can’t make sense of it and it makes me feel an overwhelming sense of rage and frustration that I can’t protect my family and I can’t stop this and it can’t be changed and it’s just painful and unfair for everyone.
So really it is just overwhelming grief. I’ve lost someone who I loved very much and was a special part of my life. I feel grief for my parents and everything they have had to go through over the last year. I feel grief for my cousins knowing the emotions they are going through too. I’m thankful that Patrick is old enough to love and remember Mia but I’m sad that the little kids are so little they won’t remember eating almost an entire watermelon on Mia’s deck. I am thankful though that my parents will be here in less than two weeks and I am going to do my best to make sure they have a real break and hopefully get to relax after such an exhausting year.