Skip to content
As the kids keep growing it is a lot of fun to watch their personalities develop and change. With the little ones it’s the small milestones they reach each day and Patrick seems to have become a full blown teenager overnight.

Like most teenagers Patrick is currently happiest upstairs in his room on Facebook while also playing is 3DS while listening to his headphones. How he does these three things at the same time is a mystery to me. We “gently remind” him to come downstairs so that he isn’t hidden away all the time. He still loves to read and is incredibly patient with the babies. One of Ella’s favourite games is to take his hat and chew on it and Patrick is more than happy to play with her most days. As time goes on it turns our Jamie and I know less and less about pretty much everything but Jamie did win some major cool points when he bought tickets for them to go see Kanye West and Jay-Z. He does still come home and tell me about his day, every afternoon I get a good 45 minute overview of who said what and the things he worked on, I hope 2 years from now he is still as excited to talk about his day.
We just had our first parent teacher conference and Patrick is doing really well at school. We are so settled now that sometimes it’s easy to forget what a big adjustment this has been for him, it is amazing that he is doing so well, that’s why he’s my scholar. The whole secondary education system is actually quite different. Patrick is currently in year 8, the equivalent of 7th grade, so he takes a really broad range of subjects. Right now his is taking English, Math, Science, Geography, Religion, History, French, Spanish, PE, Games (a game session like Rugby or Football once a week), Tech (home Ed, wood shop, etc.) and Art. He has 2 schedules so one week he is on A schedule and has half his classes and the next week his is on B schedule and does the other half. The kids take this broad schedule through year 9, at that point they select a smaller set of courses they are going to take their GCSEs, General Certificate of Secondary Education, in so year 10 is spent focused on those subjects and then he would take his GCSE exams. Once the kids pass their GCSE exams there are 3 different paths they take. 1. They continue 2 more years of school, called their A levels, and focus on a narrow set of subjects to prepare for university. 2. They go to a tech college and specialise in some sort of trade. 3. They are done with their formal education and enter the work force.  Patrick is in top set, the students are in 4 different sets based on academic performance, so he would be expected to continue through his A levels. They are also graded differently; he has a target for each subject based on his set and ability. So for example in History his target is 7, which means by the end of year 9 he should be achieving a 7 in the class. The grades in the class go 7a, 7b, 7c, 6a, 6b, 6c, etc. so the kids slowly work their way up as they develop in the subject. When we first got his report card and the grades were 6b, 5a, etc. we had no idea what it meant or how he was doing but after meeting with his teachers we are really proud. The conferences were also eye opening because the teachers are really focused on GCSEs and A levels even as young as Patrick is and getting him prepared for the process. We found it a lot more academically focused then conferences we have been to in the past. All of his teachers also passed along that he is popular socially and a bit of a talker in class, I think I got talks in class on every report card through graduation so we let him slide on that one. 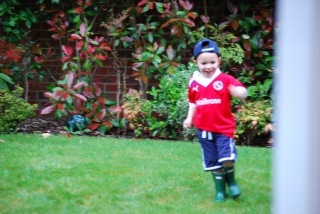 Kellen is getting so big. He is really excited to go to school; he was accepted into the school right behind our house so he will go for 3 hours each afternoon starting next September. We can sometime hear the kids out at recess and he knows that you get to play with other kids at school so he talks about it each day and puts on his backpack to pretend going to school. His tantrums have actually started to slow down which is a miracle. We’ll see what Ella is like but I think Kellen may be our strong willed child. He is happiest when playing some sort of outdoor sport so he seems to be the athlete. Football of course is the ultimate, he has to wear a football shirt each day and each morning I have to explain that it isn’t warm enough for shorts yet. Mondays are his football lesson and he talks about it all week, multiple times a day he just confirms that Monday he’s going to football. He enjoys it so much that we are going to join a football club once he turns 3. We’ve heard really good things about the Finchamstead FCand I’ve already reached out to them to see if he can start in July or has to wait until his 3rd birthday. It’s not all football though, he loves to read stories and has started “reading” to me, The Very Hungry Caterpillar is his specialty. He is all boy, joking about things being stinky is priceless material right now and anything that will get an eww out of everyone else is the highlight of his day. He is actually really sweet with Ella most of the time but sometime I turn around to find him being a little too affectionate and watch out if she gets her hands on his fire engines. I try to make sure we get together with friends and stay active during the week and we always have coffee group on Friday so he gets a chance to play with other kids.

Ella is changing by the day. She now says ma ma and da da, she waved for the first time this morning and she is a bossy little thing. She is a happy little girl who has figured out that she gets her way with everyone but Kellen. Instead of crying she has learned how to yell, so if she wants something you will hear her yelling at you from the other side of the room. She is scooting around, not quite crawling but up on her hands and knees, rolling, getting herself wedged under the couches. She is so interactive now; she giggles and squeals when you talk to her. It is also fun to see her start to show preferences. She got a cute tan stuffed monkey with a little flower in its hair at one of the baby showers (I can’t remember who gave this to her and I want to say thank you!); something about that monkey has just clicked with her. When she sees it her face lights up, she claps and gets all excited. When it plays music she is so happy and kisses it, it’s hilarious. She’s 9 months old now and getting so big. She is eating almost everything; whatever we eat she does and is sleeping through the night (finally). With both her and Kellen finally in the same room the mornings are pretty cute. On Thursday I could hear them both kind of babbling to each other as they were waking up. Ella also seems to really enjoy music. When music comes on she gets excited, flaps her arms and shakes her head. She is the only one in the family who will happily snuggle with Dad while he plays records. Since she was really tiny she would sit with Jamie and listen to his records, often times falling asleep on his lap. If you dance with her she goes crazy. Patrick will waltz around with her in a pinch if I’m finishing up dinner and Ella is impatient. It’s too early to tell but she may be the musician of the family.
Jamie and I are doing well. We are settled now and trying to take advantage of the surroundings. We joined the English Heritage Foundation so we try to make a point to get out and see the castles and plan on attending some of the kids’ events this summer. It’s a nice way to spend a Saturday; we pack a picnic, get outside and get to see amazing old castles. This summer we are going to an Olympic event, we have tickets for the family to see women’s football GB vs. Brazil! Our goal while we are here is really to try and have as many experiences as we can. On a daily basis I’ve found that I am really enjoying cooking, much more than I anticipated. I’m thinking that it must be genetic because I find myself doing things like making multiple batches of cupcakes until I find the right frosting recipe. Who does that sound like?
We miss everyone, it’s funny I wouldn’t say we are homesick but there are days when we definitely miss family or I will find myself daydreaming about the size of our old pantry.  All in all we are doing well. We have now been here 7 months and it feels comfortable, work is going well for Jamie and the kids seems to be settling in well, can’t ask for more then that.