We just got back from a 10 day vacation in Turkey; it was a great experience to get to explore a different very different part of the world. I’m still not clear whether Turkey is officially considered the Middle East or Eastern Europe, Wikipediacalls it Eurasian and it boarders Iran, Iraq and Syria to the East but Greece and Bulgaria to the west. Having primarily travelled in Western Europe it was very different than anywhere we had taken the kids before. Just driving through Istanbul on the way to the hotel the city looks different, the architecture is different, and it is a primarily Muslim country so a large portion of the women had their heads covered while some also wore full burkas. We were very excited to be able to bring Patrick to a place that seems so different and show him how much the same it really was. 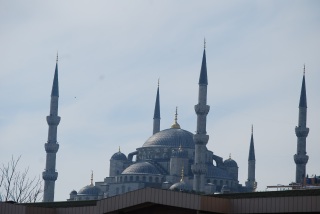 We spent the first 4 days in Istanbul going through the Blue Mosque and Hagia Sophia, we ate at a few of the restaurants featured on No Reservations and spent time at the local parks. The Mosque was beautiful the tiles and colours were striking the space inside was so open, during religious holidays thousands of worshipers will pray at the Mosque. The Hagia Sophia is so interesting because you have both the Christian and Muslim in the same building. The food was delicious; we of course ate a ton of Shish Kebabs and flatbread along with cheeses, meats and seafood. The food was a little bit hard with Kellen but most of the time the shish came with rice and fries so that worked for him. He also liked dipping the bread in the tzatziki. 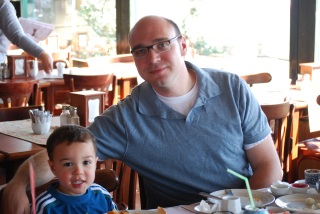 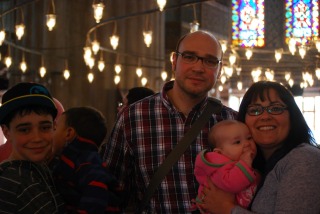 We then went down the coast to Altinkum. Altinkum is a small beach town that is obviously growing quickly. The area was an almost jarring mix of poor rural villages and new condo development communities that were obviously holiday properties. Driving from the airport to Altinkum was interesting to say the least, everything was in Turkish and we would pass farms, makeshift looking homes and ancient ruins all along the roadside. At first we weren’t sure why there seemed to be so much rubble and found out that at one time there had been Greek settlements that were then abandoned. We also passed beautiful orchards and that water was like a postcard, our view was of the Greek Islands. As we got closer to the condo we rented we turned a corner and found ourselves driving past the Temple of Apolloalong with goats and chickens roaming freely along the road. Our condo was great, 2 levels with 3 bedrooms and a bigger kitchen then I have here at the house. It had a view of the water and was a short drive down to the beach. After the hustle of Istanbul the goal for our 5 days in Altinkum was to relax, let the kids run around and just spend down time together. The little restaurant in the complex was great and Kellen loved it because he could just run laps and duck in periodically for a bite or two while we took our time eating. One day we did drive out to Ephesus to experience the closest we’ll ever get to walking through an intact ancient Greek city. 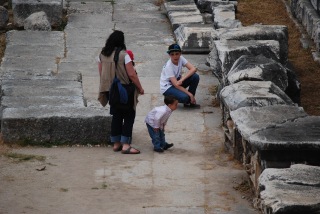 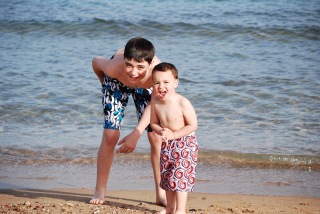 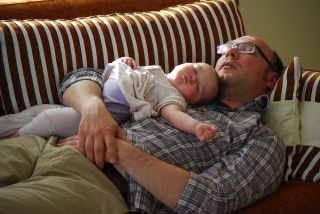 Overall the trip had everything you could want from a vacation. It was culturally interesting, the food was delicious and we got to try new things and we had enough time to take naps and just spend time together. That being said 10 days is hard with really little kids especially when you are moving around locations. The kids are getting better and better at traveling, or we are getting better and traveling with kids. We are much more efficient packers then we were at first and they are now used to getting through airports and on the flights. Patrick is a pro at security and Kellen even understands staying with us and walking through the metal detector, luckily Ella is just strapped in the Ergo for now.  We make an effort to try and take sanity breaks for Kellen; whether that is time at a park or just downtime in the room it seems to help.
One thing that continues to amaze me is how different the kids are treated in other countries. After Italy we were amazed at how much the Italians love little kids, playing with them in restaurants, talking to them on the streets, it made the trip so much easier. In Turkey we found the same thing. Walking down the street people were so friendly with the kids, they were affectionate and playful. In restaurants Ella would make a peep and she was scooped up and given a tour of the restaurant. Kellen fell down at a park and another Mom immediately grabbed him and started comforting him until I got over there. Getting through the airports we were routed through the first class check in and security lines just because of the kids in Rome, Paris and Istanbul. My sceptical side would say well of course the restaurant owners were friendly, it supports their business, etc. but this was just people walking down the street or customers, men and women. Walking through the Grand Bazaar with the double stroller the amount of attention we got was over the top.  When you feel like your kids are not bothering the people around you and are actually welcomed with open arms it makes the whole experience so much better.
The day after we got home I was online and read this blog article, Should Airlines Charge Parents with Small Children More to Fly?. After having another great experience traveling with the kids this made me so mad. I can’t say it’s just an American thing because here in England the response to kids has been similar and the airline they are referring to is Malaysian but the attitude that kids are the greatest inconvenience drives me crazy. I get it, not everyone thinks my children are the most beautiful and gifted children ever born, that’s ok. I also make a point to try not to impose them on other people (unless we are Facebook friends) or assume that everyone find their squeals and wiggles as cute as I do. But if we never take kids anywhere how will they ever learn how to behave? While I’m sure when we visit home we’ll happily have a dinner out at Red Robin I don’t want our kids to think it is the only restaurant they are allowed to eat at, I’ve learned that the UK equivalent is Pizza Express which I hear is “family friendly”. When it comes to flying I will tell you that we put a lot of time and effort into making sure we have plenty of distractions for Kellen and Ella is allowed to eat as often as she wants as long as she is quiet on the flight. Ella has been on 11 flights in her young life and it wasn’t until this last trip that she had a meltdown on the plane. It was the last 10 minutes of our flight from Istanbul to Paris and she just lost it, she could not be consoled and didn’t want to eat she just continued to scream, it was horrible. Waiting to walk off the plane everyone’s eyes were on me as I was on the verge of a meltdown myself, half of the people looked sympathetic and half looked like they wanted to strangle us both. One tactful woman in the row behind us even covered her ears. The frustrating part is that on the other 10 flights Ella hardly made a sound, if you were on the flight you wouldn’t have known she was there, yet I’m sure most of the people on the plane wondered why would even try to travel with an infant.

Why do some cultures seem to celebrate kids, not just tolerate them, while others try to contain them to large chains and separate them from adults as much as possible? I’m not sure why but I know which culture I would prefer to live in.