Skip to content
It has been way too long since my last post especially since I have thought about multiple updates over the last few weeks. It’s surprisingly difficult to get time to sit down and actually type, as I’m typing this Ella is awake making little noises so any minute now she will want to eat so I better hurry.
We are exactly one week away from our move date and it feels like it can’t come soon enough. The past almost 2 months have been wonderful in many ways but also incredibly difficult as our family has been split between here and the UK. Each day when I talk to Jamie we swap sob stories about the challenges we are each dealing with. As he is trying to finally get a bank account I’m pulling my hair out trying to get Ella to sleep in her own bed. Each day I try to accomplish one thing to prepare for the move so it feels like time is passing and I am continuously strategizing how to get Kellen through an 8+ hour flight.

When I sit back and think about the last 7 weeks it’s pretty amazing how much has changed and everything we’ve all been through. I’m happy to pass along that Patrick is not only settling in well but is happy in his new school. I just got off the phone with him and he had his first dance this evening with the local girls’ school. He has made friends, joined the rugby team and when I talk to him on the phone he sounds genuinely happy and excited. This is such a huge relief because our biggest concern with the whole move was how the transition would be for Patrick. His new school is all boys and they study a much more broad set of subjects then his school in the US. He is taking the basics like language arts and math but he is also taking both French and Spanish, religion, history and geography. The school seems to be much more demanding in pace as well which is great for Patrick since he was not always fully challenged at his old middle school. It has only been a few weeks so we will see what we think at the end of the school year but we have been so impressed already with the education he will be getting that this may be our main motivation to stay for a few more years. 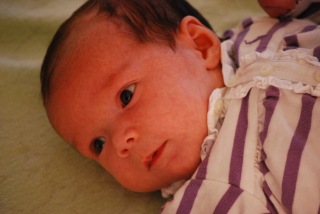 Ella has gotten so big (well relative to how tiny she was) and is now starting to be more alert in between eating. She is as cute and can be and her cheeks are rounding out nicely. She just may give Kellen a run for his money in the chubby cheek department; he had some cheeks in his day. I’m starting to think that she may be even more stubborn then her big brother, she insists on eating just about every hour and doesn’t slow down when it’s time to sleep. If she is unhappy watch out she will let you know. Papa is still her favorite; with him she can lie nicely and gaze at him lovingly. With me she only wants to eat and poor Grandma she just yells at her. Last night Grandma generously offered to hang out with the kids while I got a haircut, I fed Ella right before my appointment for 30 minutes and was only away from her for 45 minutes. I had packed an emergency bottle just in case but figured there was no way it would be needed, the little stinker ate 4 ounces and wore Grandma out. We finally have her passport and her British visa so she is all set to go. She doesn’t realize it but I’ve already enlisted Daddy’s help and it is his mission to get her in her crib once we arrive, she may be the one asking to go home with Grandma when she leaves. 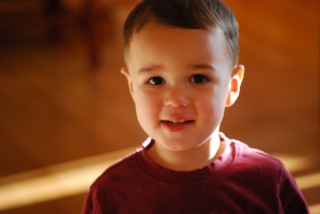 Kellen has been through so much in the last 7 weeks that I have to remind myself he is a trooper. He has a new baby sister, Daddy and Patrick moved, and we have been staying and Grandma and Papa’s. Things have just started to get better the last week or so but the poor guy had a really tough transition. Sometimes it’s hard to tell what just 2 year old behavior is and what his way of dealing with the change is. We are dealing with tantrums and some aggressive behavior, unfortunately AJ has taken the brunt of a lot of it, as well as major clinging to Mommy. But over the last week or so I’ve started to see things turn around a bit and the old Kellen has started to peak through. It does break my heart when he says “I want to go home” or “Daddy home?” We talk a lot about our plane trip to England and our new house, the fact that there is a park by the new house is the real selling point.
At one time I was going to do a blog post titled things that Kellen has broken. Being 2 years old Kellen can get a bit rambunctious and you combine that with his new found stubbornness and naturally things break. First he tried to swing on the towel rack in the bathroom and pulled it out of the wall so his first casualty was the drywall. For those of you who know my parents and how put together their house is you can imagine how terrible I felt when this happened. But to their credit they took it in stride and Kellen was allowed to stay. The second casualty I like to call “any illusions Mom had of a parenting philosophy”. When we first came to the house Kellen didn’t have juice and had to eat what was served. Bedtimes were an efficient routine that we had down with no return trips to his room or getting out of bed. I also was confident in ignoring the whining or tantrums and using tough love when needed. These days his wish is essentially my command… I’m not sure how it happened but I was joking with my parents that at this point throw the kid a candy bar and call it good. We may not be quite at that point but getting through the day with a newborn and a 2 year old have quickly taught me that while I don’t want to spoil him sometimes I’m just too tired for the fight. I keep telling myself that once we are in our new home and Daddy is there to help that I’ll get things back on track. I’m sure future blog posts will be dedicated to this effort. The last and final thing Kellen has broken (hopefully the last we have 7 days left) is Papa’s rib. That’s right, my Dad’s rib is now broken. Papa was helpfully giving Kellen a bath in their huge bathtub. I’m not totally sure how exactly it happened but somehow by leaning over and Kellen refusing to come closer, I’m sure was swimming around like a goofball, pressure was put on the wrong spot and Papa now has a hairline crack in his rib. Poor Papa is in pain and miserable if I thought I felt guilty about the drywall the rib has taken it to a whole new level.
So how am I doing? I think the experience so far has been more difficult than I anticipated. It’s hard to have a newborn and a toddler, especially with Jamie being on another continent. My parents have helped so much and been so wonderful that I don’t think we could do enough to repay them for the help, we’ve turned their house upside down and while I’m sure time with the grandkids has been great I’m also sure they will enjoy some peace once we’re gone. I also didn’t anticipate how much I would miss Jamie. That might sound bad but I figured that the work of two kids would be hardest part but really I miss my husband. When he surprised us by coming home for a weekend it was a reminder of how much I miss having him around both for myself and the kids. But I am actually doing well, I have the kids fairly under control, we’ve settled into our new routines and I am just so excited that our move date is almost here.
I doubt I’ll have a chance to post before next Friday so once we are somewhat settled I’ll start sending out updates about how we’re doing.